Things I Didn't Suck At This Year--The Garden in Review

It's still really nice out (86 today, oh yeah!), but being September, it always feels like the end of the garden season.  Maybe I should give myself a month, but here's a little update.

Of course, as usual, I was insane to believe that I could get our whole property rehabilitated in ONE SEASON (ok, 3 actually...spring, summer, fall), but I have big dreams; it's a gift...which means I'm great at biting off more than I can ever chew.

This spring I was all like, by fall...this whole place will be totally turned around.  Well, reality called.  They want their facts checked.

Instead of beating myself up for the fact that the pond area still looks like THIS: 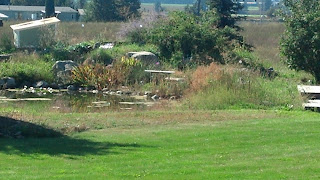 OMG are those ALL weeds?!??
...I'm focusing on what I DID get done.  See the super cool chicken house in the back of that picture, there, waiting to be unloaded by the old coop?  We had that built for the chicks, and we just painted it my favorite green, and it's totally awesome, so that's one accomplishment.  Check.

The rose garden has rampant black spot (no picture of that, but trust me, it's ugly), but I am still going to focus on what's good, so--  From a distance, the roses *look* great: 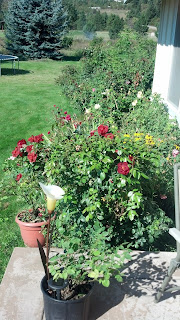 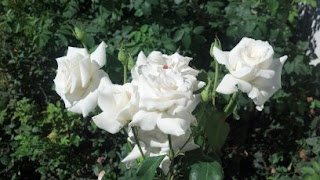 I did have to eventually get out the Daconil and spray the heck out of them, plus I sent the kids out to remove and trash any black spotted leaves (again?...we just did that...I thought we were going to the beach today).  There's still lots of spots, but I'm gaining on it.

I also broke down and sprayed 3 full backpack sprayers full of some very strong weed spray yesterday, so I covered the walkways, lawn beds, rose garden walkway, pond beds, gazebo area, and around the garden sheds, so hopefully that will start to look better, in 2-4 days...I have more of it, and I think I'll keep using it til it's gone, or the weeds are dead, or it snows, whichever comes first.  Should have used it earlier, but I'm such a procrastinator...and the beach was SO nice.

We started the new 12 chicks in the spring, and they are giant happy hens now.  The two banties turned out to be roosters, but they are too pretty to get rid of, so they have to just work it out, man.  We have been getting as many as 9 eggs a day from that batch already, which is earlier than ever.  I blame the roosters, but in a good way. 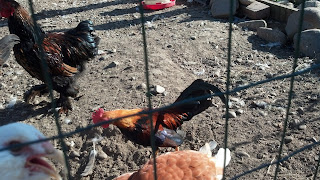 See the cochin with feathery feet at left, and the classic English banty? Also, up close in the left bottom corner, is "Pearl", my overly friendly Americauna hen, totally photo bombing the shot.  LOL
I found a two-way street with aphids in the yard this year.  I didn't see any of them in the vegetable garden, for which I am eternally grateful.  Downside...the gallica roses were covered with aphids on all the new growth.  Normally I'd freak out about that, but I decided to let the roses take one for the team, and left them alone, and there are still none (not even one) in the vegetables, so...I guess that's good.  The cauliflower are broccoli are clean as a whistle, and if you grow those, you understand how great that is!

I also found a giant bald-faced hornet's nest in the tree on the walkway to the garden, which scared me quite a bit, because they're supposed to be very aggressive.  These ones seem pretty chill, so I let them stay, and I think they have actually been a help in the garden.  Plus I know that they'll be dead as soon as the frost hits, so we're good.  Their hive is so big I could rent it out as an apartment... 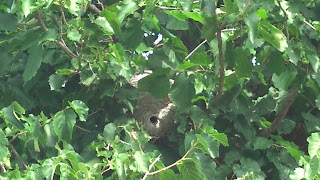 Scary and right by a walkway, but so far, we're just living in peace and waiting them out. When I mow lawn under this tree, though, I totally get the willies...like they're watching me.  It's bigger than a basketball!

I won't even go into the front yard, where nothing happened.  At. All.  I did get all excited and order $300 worth of fall bulbs to plant out there, way back in May, with the assumption that I would totally have the front yard dialed by September, all ready for new bulbs.  Ummm, that so did not happen, and now I have a giant shipment of bulbs on its way, and the beds they need to go in are still solid weeds and grown-in lawn grass.  I'm trying not to think about it yet...

On the plus side, I've gotten really good at what I call, uh..."weedeater landscaping", which is where I use the weedeater to trim, dead-head (and I use the term loosely) and weed, all in one fun step.  Like a one-woman DIY yard maintenance crew in a full-length ninja outfit, hat and sunglasses, to keep from being killed or permanently scarred by all the flying gravel. (I also hate weed-eating passionately, but there's no way around it except a flamethrower, and those are hard to find).  Did you know if you weed-eat really close to the ground inside flower beds, the green junk leftover from the weeds you just cut to dirt-level, looks like a green mulch.  :D  It's working for now, so give me a break, people...

The main bonus this year was the vegetable garden, where I really spent most of my time.  It went from this, in May: 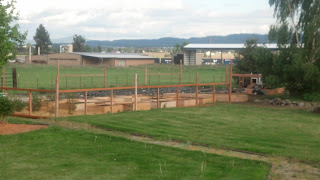 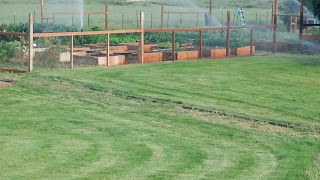 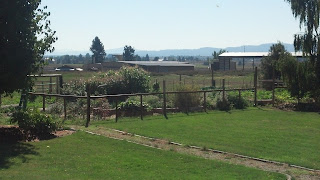 I also forgot, when I planted 5,000 square feet of vegetables, that once they are ready to pick...you will be canning or freezing them, every.single.day until they're done.  So, there's been some conflict of interest, between beach desire and vegetable needs.  I also hate canning at night, because that's our family time, and it makes me look like I didn't get anything done during the day, but it's worked out OK.  And, how could you not love THIS: 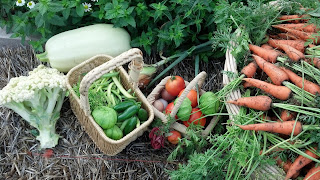 The best thing is that we are all healthier than ever because of all the wonderful food, and I feel connected to our land again in a way I haven't, since my 10-year detour into wedding cakes.  Also in the sense that I have some of it permanently embedded in my...heels... ack! Garden Feet!  Gross!  What the heck-- I have all these beautiful shoes, and now my feet look like I belong in a Dark Ages documentary...

I'm still working on getting the weeds knocked down around the pond, and the front needs pretty much a complete overhaul, but I'm trying to just enjoy what we did accomplish, and whatever didn't get done this year, can go on next year's To Do List.  Also, I'd be interested in your best offer on a used weed-eater.

Now, if you'll excuse me...I have a giant basket of carrots to peel and can before it gets too much nicer out today, because we had to pick them ALL to save them from the moles after we realized they were mysteriously disappearing...underground.﻿  Buggers.

As soon as that's done, I'm taking a Mike's and my book and going out to lay in the sun and enjoy every second of this lovely still-hot September day.  Because I can rock a blanket on the lawn like nobody's business!    ;)
at 11:53 AM

Email ThisBlogThis!Share to TwitterShare to FacebookShare to Pinterest
Labels: gardening