We Now Have a Clowder, or a Glaring--Or is it a Glaring Clowder?


Wikipedia says a group of cats is called a clowder, and my daughter says it's also called a glaring, which I thought was hilarious, because that's what I'm seeing a lot of, this week.  Glaring.  And hissing.  (And not just because there are lots of girls in this house...)

Since I'm making chili (again) because of our overabundance of tomatoes, I'm in the kitchen (again), where my mind tends to wander, and I thought hey, we got a new pet, and I haven't even TOLD anyone yet.  And since my phone never rings EVER (except for customers), I'm telling you.

(This is the part where you put on your "How interesting--please tell me more" face...)

So, yes, we have officially crossed some kind of line and now have THREE cats.  I lean towards thinking three is too many, maybe, which is why I also strictly do NOT go to the animal shelter, because I'd end up taking them ALL home, so then I think maybe three is pretty good.  But four, no.  Four would be officially too many.  Really.

We saved all three of our cats (Louis, Jack and--tentatively named--Sam) from stray-hood by taking them in, so we now have a misfit band of prior strays, who turned out to be total rock stars, to quote Shane.  Which makes me wonder...aren't MOST cats in that boat (not the rock star boat--the misfit/saved/stray boat)?  I mean, do you know anyone, even one single person, who has ever said, "Oh, we're shopping for a cat.  You know, perusing breed websites and driving around to breeders and setting our spending limit.  We haven't really decided yet, but we're sure that *right cat* will come along."  No.  People do NOT shop for cats, or at least...not in this neck of the woods.

Pretty much all my life, I have always had a varying rotation of, but never more than, two cats, which seemed just right--"two" appearing to be the very limit of how many cats we should have.  Remember that "two cats in the yarrrrrd" line from the Cat Stevens song?  He didn't say "three cats in the yarrrrd," because that would have skewed the picture, right?

Louis has been here the longest (about 9 years), so he is the Big Cahuna.  He is also very lazy and just.plain.big.  But we try not to judge...


We got him from a family after he was dumped at their house as a kitten, to keep them from taking him to the shelter.

Last year Shane brought home Jack one night from a lady at a gas station who was trying to find him a home rather than let him run wild.  Louis hated him at first, but Jackie was convinced that Louis was his new BFF/Big Brother and refused to leave him alone, so Lou had no choice but to just accept it. 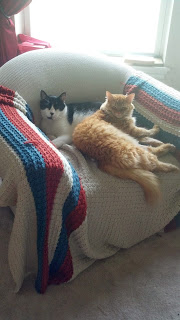 
And then, last week my oldest went for a jog and came home with...Sam: 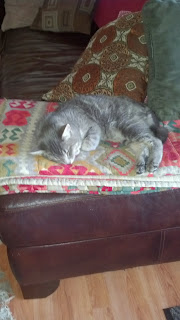 His first night at our house...WHO could ditch this little guy?

We live in a fairly rural area, and I swear there's an invisible symbol on our road sign, renaming it:  Dump Your Unwanted Cats Here. (Cat dumpers...you guys suck, by the way.  It's NOVEMBER!)

Sam was sitting by the stop sign at the corner of our main road and the highway (nowhere NEAR a house or farm).  He saw my daughter and immediately jumped on the road and started running after her, meowing, all the way to our front porch, where he curled up on her lap and made himself at home.  We put the word out with the neighbors, in case someone was missing a kitten, but I'm pretty sure he was dumped. In November.  In the middle of nowhere.

So, I guess we now have a clowder of cats. And this week there has been a lot of glaring and hissing, and, once Jack realized Sam is a kitten...a lot more NOISE.  Since they are both at the age where ANYtime is a good time for wrestling, we now have Cat Olympics at all hours, with what sounds like the championship rounds taking place whenever we're trying to sleep.

Louis is still SO not amused, and sometimes he will just growl at the WALL right now.  He's super grumpy about Sam, and I'm pretty sure he's the one who, the very first morning after Sam arrived, pee'd right in the middle of our bed.  Like, oh yeah?--well, see how you like THIS.  That is so NOT COOL.  Especially when Shane doesn't really *like* cats.  Moves like that...really do NOT help your position, Louis.  Get it together.

So, the glaring clowder continues.  And the chili needs my attention, so I better go.